Stewart Roberts spent his childhood in Pembrokeshire, and when the family moved to Treorchy in the Rhondda he was educated at Treorchy Comprehensive School and later at the University of Wales in Cardiff. Whilst at Cardiff he studied the piano with Richard McMahon and Caroline Rae and cello with Chris Hodges. In 1995 he graduated with a Bachelor of Music Degree, and was awarded the Eleanor Amy Bowen Scholarship which enabled him to pursue his Master’s Degree in 1996. In 2001, Stewart gained the LRSM Diploma in Piano Performance. As a solo pianist Stewart has performed concertos by Grieg, Shostakovich, Mozart and Beethoven. His most recent performance was in the ‘Warsaw Concerto’ with the Cardiff Philharmonic Orchestra at St David’s Hall, Cardiff, and the orchestra has invited him to appear with them again in the near future. Stewart Roberts has accompanied many of Wales’ distinguished vocalists, including Rhys Meirion, Rebecca Evans, Shân Cothi, Wynne Evans and Anthony Stuart Lloyd, and in 2007 he accompanied Hayley Westenra in concert at St David’s Hall.

Stewart’s passion for male choral singing was ignited when he was appointed accompanist to Côr Meibion Morlais at the age of sixteen. Since then he has worked with Dunvant, Ynysowen and Only Men Aloud, and was Musical Director of Dowlais Male Choir 2000-2007. Following the retirement of John Samuel as Pendyrus’ Conductor on 14th January 2009, Stewart readily agreed to take up the baton, and he was formally appointed the fifth Musical Director in the choir’s 94 year history on 22nd February 2009. Two proud moments in Stewart’s career was winning ‘Choir of the Eisteddfod’ and ‘Best Conductor’ with Pendyrus in 2010 & 2012 at the Cardigan Semi-National Eisteddfod. Pendyrus also won best Male Choir at the same competition in 2017. Stewart was appointed accompanist to ‘Noteworthy Mixed Choir’ from Maesteg in 2014.

Stewart is delighted to become part of the LARS team and is looking forward to working closely with Cerith Owens, Catrin Hughes and Andrew Pike to give opportunities to young, talented singers and instrumentalists across South Wales. 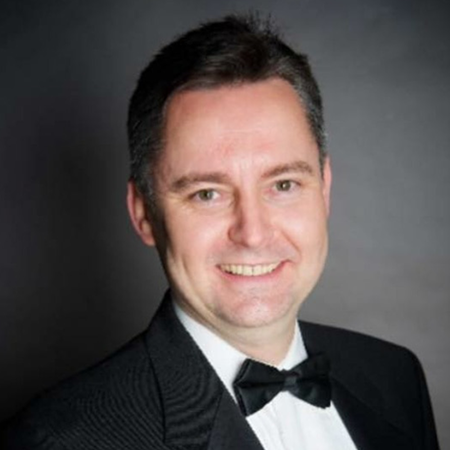