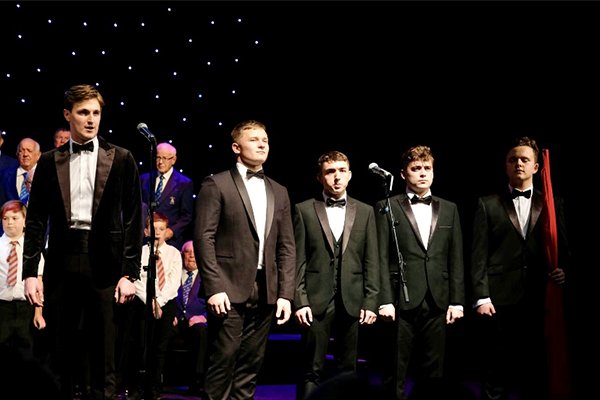 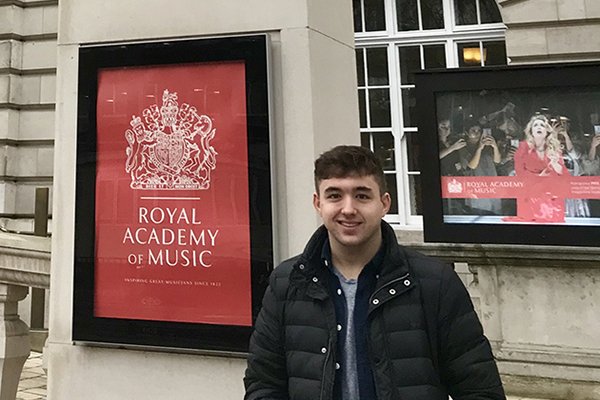 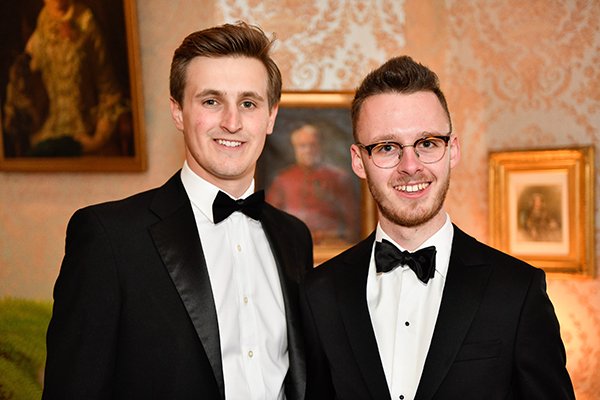 We heard from Sam that he had received a wonderful opportunity to play Enjorlas on the UK Tour of Les Misérables in Glasgow and Liverpool.  Sam will be returning to the West End next year.  Congratulations from us all.

The world famous Pendyrus Male Choir, under the baton of Ieuan Jones, invited LARS to perform alongside them at a concert in Rhoose, near Barry.  LARS selected Darcey Paris George and Osian Clarke.  Darcey is one of LARS’ newest members and in a short time has made a great impression.  Osian is now a seasoned young performer and travelled back from his studies at the Royal Academy of Music in London to perform.  Both young singers were on top form and received standing ovations from the appreciative audience.  The Rising Stars were accompanied by Gavin Parry, the accompanist for Pendyrus Male Choir.  It was one of those unforgettable evenings – great ambassadors for LARS and the choir was brilliant.

On 6 November LARS hosted a highly successful Vocal Masterclass with internationally-acclaimed baritone Gary Griffiths.  This event certainly lived up to expectations and the audience were enthralled with the afternoon.  The introductions were performed by LARS Honorary Patron Huw Tregelles Williams OBE and the accompanists for the singers were LARS Musical Advisors Catrin Hughes and Stewart Roberts.

Gary grew up in Pembrey and studied opera at the Guildhall School of Music and Drama where he won the prestigious Gold Medal Competition (2009).  He has won a plethora of competitions including, in 2012, the Welsh Singers Competition when he was invited to represent Wales in the Cardiff Singer of the World finalist (2013).

The three Rising Stars that participated were:

The singers performed a selected song, then Gary used his vast experience and skills to enhance the performance –  you could see the difference after just 30 mins of tuition.  The singers remarked that it very worthwhile and the audience benefitted too !!

James Oakley was the winner of the vocal category of Côr Curiad’s ‘Young Musician and Vocalist Competition’.  This event was organised by the choir as part of their 25th anniversary celebrations. It was an on-line competition despite the ambition of holding it live at Ffwrnes Theatre.  It was a very good competition and James won the very generous prize money of £500.  We were delighted that Lauren Fisher was runner up in the vocal category.  LARS 1st and 2nd !

James Oakley provided the musical interlude at the President’s Night of the Rotary Club of Llanelli, a prestigious black tie event held at the Diplomat Hotel in Llanelli on 27 October.  James was accompanied by Christopher Davies, Head of Music at Ysgol Y Strade.  His audience included several Friends of LARS, who from their expressions were proud to have one of the Rising Stars as the guest artist.  President Ieuan Griffiths was particularly delighted with James’ contribution which enhanced what was an excellent night for him and Llanelli Rotary.

The brainchild of Morriston RFC Male Choir, the ‘Together Again Concert’ at Morriston Tabernacle Chapel on the 23rd October was a massive success bringing together Morriston and the neighbouring communities to enjoy live music once again.  It was a feast of music which stirred so many emotions.  The choir had invited the newly formed Morriston Hopsital Emergency Department Choir led by Jonathan Lycett, and two of our Rising Stars, soprano Lauren Elizabeth Williams and tenor Osian Clarke.  Lauren and Osian did themselves and LARS extremely proud.  To end the concert they both joined the choirs in combined items performing ‘Anthem’ from Chess and ‘One Voice’ , which again brought the audience to their feet.  LARS Chairman Cerith Owens was compere.

D. Huw Rees, the musical director of the male choir, accompanied the LARS soloists, the choir was accompanied by Hywel Evans and organist was the President of the choir Huw Tregelles Williams OBE, who is also the Honorary Patron of LARS.

We are proud to announce that our Rising Stars have been invited to perform at the following events.  They would be delighted to have your support and we can provide you with a direct contact or arrange tickets on your behalf.

The first event for LARS since the beginning of 2020 was a Special ‘Thank You Event’ for the ‘Friends of LARS’ at the Memorial Hall in Burry Port.  It was to show our gratitude for they’re continued support throughout the pandemic.

It was a massive success as it provided a much-needed platform for our young singers who hadn’t performed in front of a live audience for over 18 months and also an opportunity for our Friends to hear live music once again; some of the audience were overcome with emotion.

A special ‘Board of Trustee Volunteer Recognition Award’ was presented to Mavis Anderson for what she had done to support LARS, especially in its early years through fundraising and other key activities.

Since graduating from the Royal Welsh College of Music and Drama in 2019 with a First Class Honours degree in Drama, Callum has developed into a fine young actor.  This has culminated with Callum securing a main role in the hit Channel 4 Drama series ‘It’s a Sin’, which aired in early 2021.  We are incredibly proud of what Callum has achieved so far, and hope that he will go from strength to strength

Sam graduated from Guildford Drama School in 2018, and has been living and working in London ever since.  Sam’s big break came when he secured a role in Les Miserables on the West End stage.